Basic facts on impact and law

109OZ has not been approved.

Height.  The proposal is for a "6-story", but with its double-height first floor and HVAC story it is 82 ft, as high as an 8-story building, and 2-8 times higher than every building in the area.  Ossington is LOWRISE (1-4 stories), the proposal is MIDRISE (5-10 stories).  The MIDRISE height (82 ft) almost doubles Ossington's LOWRISE by-law maximum (46 ft).

Bulk, looming, shadow.  The proposal is 151 ft wide (1/3 of the block) and 116 ft deep, just 21 ft from Argyle Place, abutting Givins residences. Multiplied by its 82 ft height, this makes for a huge, bulky structure, three times as voluminous as everything else on the block combined, which would loom oppressively over the center of the Ossington strip and several dozen homes, blocking afternoon light from dozens of cultivated front and back gardens.

Balconies, overlook, and noise.  The proposal has 80+ balconies closely and directly overlooking front and back yards of several dozen homes on Argyle, Givins, and even Brookfield.  The privacy and noise concerns for residents (especially given advertising promising a "party building") are obvious.

Negative impact on Ossington's character. Like Williamsburg, Brooklyn, Ossington's status as Toronto's restaurant row and eclectic destination district is crucially constituted by its "main street character buildings" and open "street piazza" feel.  Dropping a big ol' King West-style big-box condo with chain retail on the strip would suck the cool from the area, and set a precedent for MIDRISE on Ossington that would quickly degrade it into a place like any other.

Density.  The proposal has a density---the ratio of square footage built to the size of the lot---of 3.9.  That is 56% higher than the existing by-law maximum of 2.5.

Cars, parking, safety.  The proposal has underground parking for ~70 cars off of the narrow Argyle Place laneway (which would need to be widened---how?).  This doubles the cars in the area and raises serious safety concerns about vehicles cutting across Argyle St, the main walking path of children to Givins-Shaw Elementary and a primary pedestrian and bike path route to Trinity-Bellwoods park.

The Basic Question.  Reserve is asking the City to grant them large exceptions to our by-laws so they can build MIDRISE in our LOWRISE area.  Why would the City do this, when it would leave our business, residential, and school communities significantly worse off?

The only possible reason would be if the Official Plan's call for "intensification" in mixed-use areas like Ossington supported MIDRISE here, in law or in fact.  It doesn't.

First, the Plan along with the associated "Avenues and Mid-rise Buildings Study" calls for MIDRISE to occur on "Avenues" (broad miles-long retail corridors, like King, Queen and Dundas), which are big enough to sustain MIDRISE.  Less than two years ago, it was determined that Ossington is NOT an "Avenue", hence determined that growth on Ossington should NOT be subject to MIDRISE development.  This makes sense, since Ossington is nothing like an "Avenue", nor will it ever be.  Ossington's retail segment is too short to be a "corridor" (only 600m, from Queen to Dundas) and Ossington is too narrow to be an Avenue: at only 17.5m it is 8 feet below the minimum 20m width to be an "Avenue", and widening Ossington to 20m would require tearing down and replacing all the existing buildings, including 4 historical designation buildings).  That's not going to happen.  Plus, Avenues are supposed to be the bearers of heavy traffic: but the Ossington strip is second-lowest in traffic volume in the West End among non-Neighborhood streets.

Second, there is no need to interpret the call for intensification in mixed-use areas like Ossington as somehow requiring MIDRISE development.  Density on Ossington is nowhere near the LOWRISE limits---we could easily double, perhaps triple, the density on Ossington within the existing limits.  We have not outgrown the by-laws.

So there is no good reason for the City to permit exceptions to our zoning by-laws that would contravene the recently updated Official Plan (according to which Ossington is NOT an Avenue, and so should NOT be subject to MIDRISE development) by allowing Reserve to put MIDRISE (5 stories or more) on LOWRISE (1-4 stories) Ossington.  And the serious negative and destabilizing impacts associated with this proposal constitute a multitude of good reasons for the City to forbid any such thing.

Who's minding the store?  The Official Plan says that  "Intensification of land adjacent to neighbourhoods will be carefully controlled so that neighbourhoods are protected from negative impact. Where significant intensification of land adjacent to a Neighbourhood or Apartment Neighbourhood is proposed, Council will determine, at the earliest point in the process, whether or not a Secondary Plan, area specific zoning by-law or area specific policy will be created in consultation with the local community following an Avenue Study, or area based study" (OP 2–22).  This has not occurred.

Ultimately, we are going to have to rely on our City Officials---Planner Francis Kwashie, and Councillor Mike Layton---to directly effect the protective measures that are called for in the official plan.  We call on Planner Kwashie to acknowledge that the Official Plan's call for growth in mixed-use areas like Ossington can be answered without allowing de facto exceptions to our by-laws that would effectively convert Ossington to MIDRISE, with the ensuing destabilizing results on our business, residential, and school communities.  And we call on Councillor Layton to pledge only to support applications that KEEP OSSINGTON LOWRISE. 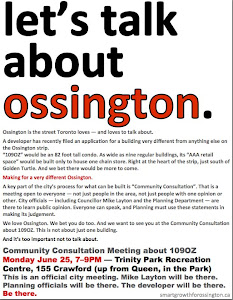 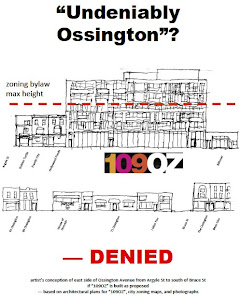